Thanks to James Pethokoukis and economists Richard V. Burkhauser, Jeff Larrimore, and Kosali I. Simon for tackling the Left’s absurd claims about income stagnation for the middle class. I’ve never understood how the stagnation argument gets any traction, since it’s obviously false. Anyone who has lived in America for the past several decades knows that there has been a tremendous rise in the median family’s standard of living. Look at the vast and affluent areas of metropolitan Atlanta, Austin, Charlotte, Houston, Las Vegas, Los Angeles, Orlando, Phoenix, Seattle, and a host of other cities—areas that were undeveloped forty years ago—and tell me that increases in income and wealth have been restricted to the top 1%. Someone’s living in all those areas, and there aren’t enough people in the top 1% to explain even a tiny percentage of it. 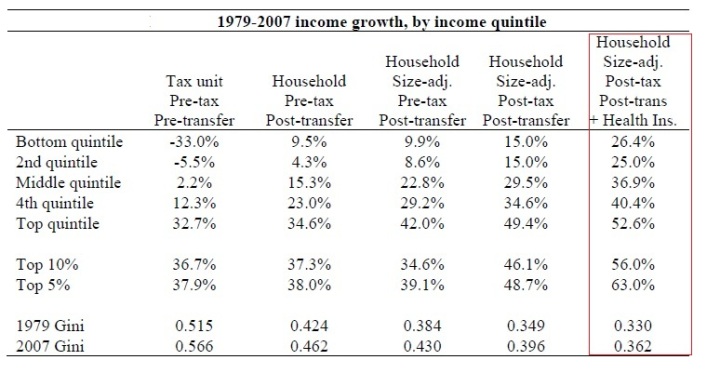 See that? Inequality is down over that period. That’s in spite of massive immigration that leads to a flood of newcomers coming in at or near the bottom of the distribution. People in the bottom two quintiles have seen increases of at least 25%; those in the middle quintile, almost 37%. The effect to which leftists point is due chiefly to decreases in the size of households.

Even the above numbers can understate the rise in living standards considerably. Mom and Dad are bringing in $50K while junior is in college. Junior gets a $20K a year job and moves out, filing his own tax form. Per household income has dropped precipitously, from $50K to $35K—a 30% decline! But everyone is better off. Per person income is up 40%.

The moral: Be careful about statistics. You’re going to hear a lot of them during this campaign season, and a lot of them are going to contradict what you see around you every day. Trust your eyes, and watch those statistical arguments very, very carefully.