Congratulations to the Texas State Board of Education, which has withstood a ferocious assault from the Left and passed new social studies curriculum guidelines. The new guidelines are a significant improvement over what were already excellent guidelines:

I testified before the Board on Wednesday, and was shocked by the utter lack of sensible argument coming from the Left. Don’t take their complaints at face value; show that you’re more responsible than the Congress, the Attorney General, the State Department, etc., and read the standards yourself.

Perhaps the most telling example occurs in the elementary standards, which received relatively little attention. The Board changed

identify characteristics of good citizenship, such as a belief in justice, truth, equality, and responsibility for the common good

identify characteristics of good citizenship, including truthfulness, equality, respect for others and oneself, responsibility in daily life, and participation in government by educating oneself about the issues, holding public officials to their word, and voting.

Testifying before the Board was an education in another way as well. The media were there in force for the first few speakers (including me), but most left after hearing from Benjamin Jealous, the President of the NAACP, who quite remarkably had almost nothing to say. He seemed deeply concerned about one particular change, from ‘the growth of the Atlantic slave trade’ to ‘the triangular trade and the growth of slavery,’ which he called “offensive.” I didn’t get it, and neither did most of the Board, but they ended up accommodating him. As soon as Jealous finished, several dozen of his supporters, and a majority of the media, departed. Most of the media, plainly, had already written their narratives before coming for the day of public hearings. They just needed some footage to accompany the already-written story. The news isn’t so much reported as manufactured by a fairly sizable group of media personnel, public officials, and “public interest” organizations.

UPDATE: To judge the degree of media bias, consider these two pictures of Board Chair Don McLeroy, whom I observed to be unflappably fair-minded. Here is what he actually looks like (though in reality he’s thinner): 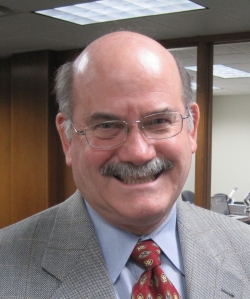 And here’s the picture from the Austin-American Statesman article about the public hearings (with his hand raised, voting; he’s not wearing a shroud!):